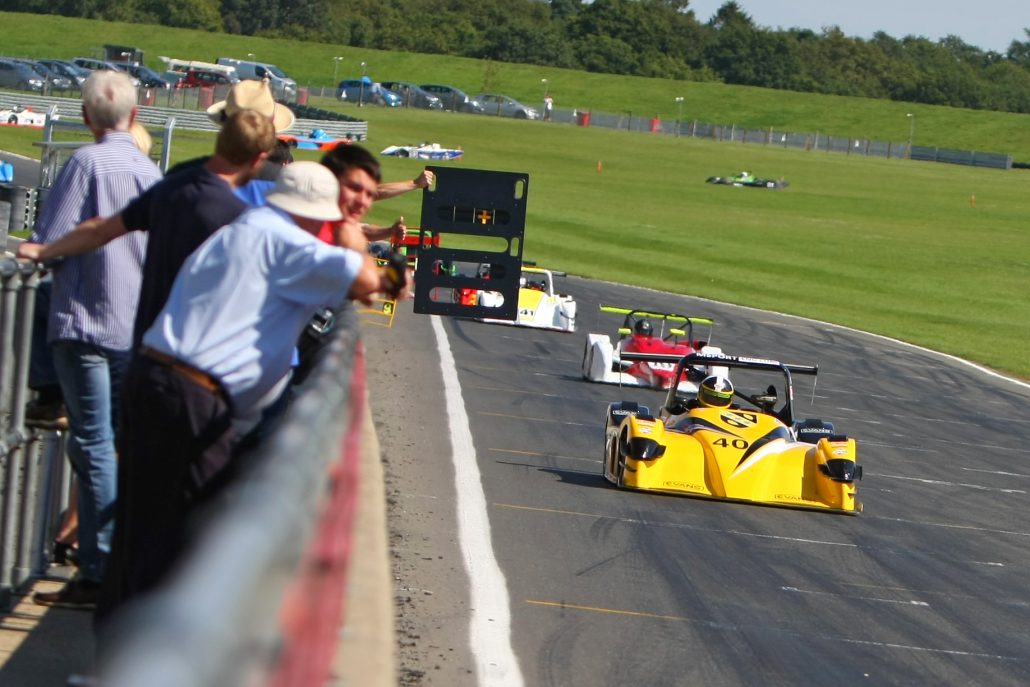 Round five of the Sports2000 Sprint Championship would be hosted over the August bank holiday weekend in Norfolk, alongside the British Formula 3 Championship. A long cross country drive from Swansea saw the team arrive in good spirits to a surprisingly sunny and wind free Snetterton Circuit on the Thursday to get all set up, ready for testing on Friday.

Friday started with more glorious sunshine and four 30-minute test sessions out on track to prepare for. The day turned out to be a mixture of solid progress and setbacks. A clean session was hard to find, with a couple of red flags putting a stop to things throughout the sessions. Tim was on a good pace all day, quickly able to match his times from last year despite being on old tyres. The team worked hard in the sun, which persisted through the day, checking over the car and making some adjustments to improve the feel and balance for Tim. Unfortunately, one of our sessions ended prematurely with Tim returning to the pits with three inflated tyres and one decidedly flat one. Luckily no harm was done to the car apart from a little damage to the splitter which the team got repaired quickly and we were back on track in the afternoon, where Tim continued to improve his times ending the day on a positive note.

The team could relax a bit on Saturday as Sports2000 were not running at all. The car was given a thorough checking over, ready for a busy day on Sunday. All was well. The team then had some time to relax and watch a bit of racing and partake of a well-deserved barbeque in the afternoon.

Sunday, race day! Thankfully the early week forecast of rain was proven wrong with another day of sunshine and light breeze. Qualifying kicked off at 10:45 with a large grid of Duratec and Pinto cars meaning finding a gap was critical. Tim was straight on the pace, his first flying lap giving a solid banker lap to build on. Disappointingly, our tyre troubles were not behind us, Tim returning to the pits after only a couple of laps with another shredded tyre. The team sprang into action and a rapid racing pit stop was the wheel changed and Tim back on track. There was just enough time left in the session for Tim to get one more flying lap in, posting his fastest time of the weekend, good enough for P6 on the grid, a great effort!

Straight after the lunch break the grid was formed for the 30-minute race. Tim made another of his awesome starts, seeing him jump to 4th by the first corner onto the back of the leading pack. Nick Bacon in his Loaded Gunn was applying pressure but Tim was holding the position well. Only a couple of laps in Giles Billingsley suffered a suspension failure approaching the final corner, bringing out the yellow flags. Thankfully, he was able to get the car stopped inches from the barriers with no damage done. Unsighted and not seeing the marshal post, Bacon mistakenly overtook a slowing Tim in the yellow flag zone. Some good wheel to wheel racing followed as Tim quickly looked to get his place back on the road, but the matter was settled when Bacon went wide onto the grass giving Tim the opportunity to slip through. Tim had pulled a comfortable gap to those behind him to take the chequered flag in a superb 4th place, with all four tyres inflated! Up front a race long 3-way battle for the lead saw Michael Gibbins in his MCR put up a stoic defence of first. In the closing stages though he was finally edged out by the Gunn’s They took the flag nose to tail with Paul Trayhurn 1st, Tom Stoten 2nd and Michael Gibbins 3rd. This result meant that Tom Stoten had enough of a points advantage to take the championship title with a round to spare. Our congratulations to him, well-deserved after a very solid season and some excellent drives.

A testing weekend for the team, but P4 overall, 3rd in class was a superb result and a great payoff for all the hard work. To top it off Tim received the Driver of the Day award, emphasising the great job he did with a great racing performance.

The team then embarked on the long journey back to Swansea, in proud possession of another trophy and looking forward to closing out the season at Brands Hatch with another great result.