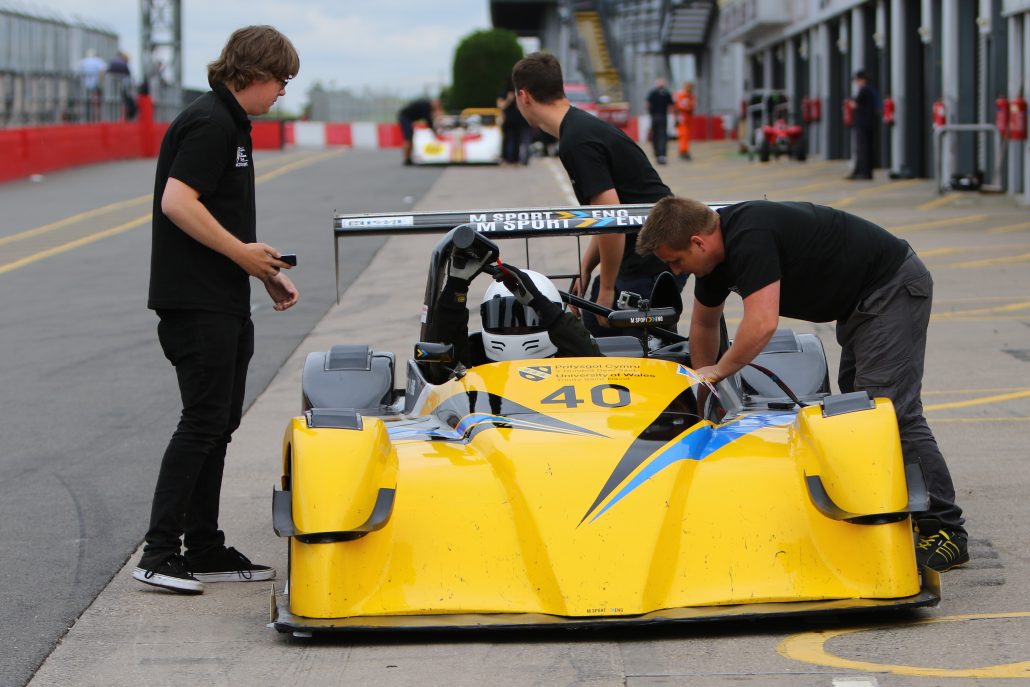 This weekend saw the team head to the brilliant Donington park circuit for our second round and our first endurance race of the season. The endurance format differs from the sprint format that we’re used to, as instead of having two 25 minute long sprints we have the one hour long race to contest with. The endurance format also requires each car to make a mandatory pitstop of minimum duration 2 minutes during the race. The pit window opens at the 20 minute mark and closes at the 40minute mark.

As part of the long-term development of the car, an aerodynamic study has been pursued by students and finally, an update was ready! This took the form of a re-designed front splitter, made from composite materials & shaped for greater performance. With the new bodywork attached, Tim emerged on track for his out lap. Car 40 reappeared in the pitlane after just 1 lap. On close inspection it became apparent that the splitter was working well, but the car setup required changing to accommodate it fully (not a job for the final round of the season!) A successful days testing meant the whole crew could relax for the evening after checking the car over once more.

On Friday the team had a full day of testing. Unfortunately  we had heavy rain for most of the day. This meant that the team needed to switch the setup on the car to a wet weather setup making changes to the suspension settings and of course switching to wet tyres. The car ran well and Tim was able to get some good laps in ahead of the race. After the practice sessions the students checked to fuel only to find that there was still residue from the foam inside the tank getting in the system and being caught in the fuel filters. The team decided to flush the system after each session to make sure we didn’t have a repeat of the issues we faced at Oulton park. By the end of the day we had got this process down to a fine art ready for qualifying and the race on Sunday. Practice was also used to time the pit stops ready for the endurance race so that we could get as close as possible to the 2 minute minimum stop.

Qualifying took place on Sunday morning and much to the delight of the team the weather had significantly improved. The team reconfigured the car to its dry set up and sent Tim out on the slick tyres. Out of the ten laps Tim managed in qualifying his quickest was good enough for 4th on the grid for the endurance race. A great result that put us right up near the front.

It was time to put together everything we had learnt in previous sessions for the race. Before we had even made it the assembly area the team had been hard at work flushing out the fuel system once again and replacing a cracked suspension bracket that had failed due to fatigue. The car was ready and Tim lined up 4th for the rolling start. As they headed into the first corner Tim had a look at a move on 3rd place but was forced to slot back into 4th. He pushed hard to stay with the top 3 but began to face pressure from one of the cars behind. As the race went on there were problems for other drivers fighting over the top spots with the then race leader, Charles Hall, finding the gravel trap and putting himself into retirement. This moved Tim up into a podium position until he was overtaken by the flying red Lola of Chris Yarwood. However shortly after, an engine failure for the 2nd place MCR would see Tim reinstated to the podium positions before the pitstops.

The Team called Tim in for his mandatory stop and made sure that the car left the pits after the 2 minute minimum. As this was the teams first endurance round in a long time and the first ever for many of our team members we had been cautious with the time allowing plenty of margin for error. While we were able to avoid a penalty for an illegal pit stop we also lost time to one of the MCRs behind who managed to emerge from the pits in front of Tim. Once the pit stops had concluded we found ourselves comfortably in third place having had a much quicker pitstop than the Lola which now ran behind us. From this point on it was simply a case of bringing the car home to our first podium finish of the season.

Tim had driven a fantastic race setting a very consistent pace and earned a well deserved podium in the process. For the rest of us Donington had been a great learning experience and had given us lots to think about for the next endurance round at Brands Hatch. We now had a better understanding of the cars fuel system and how to maintain it as well as the mandatory pit stops that we know we can improve on.