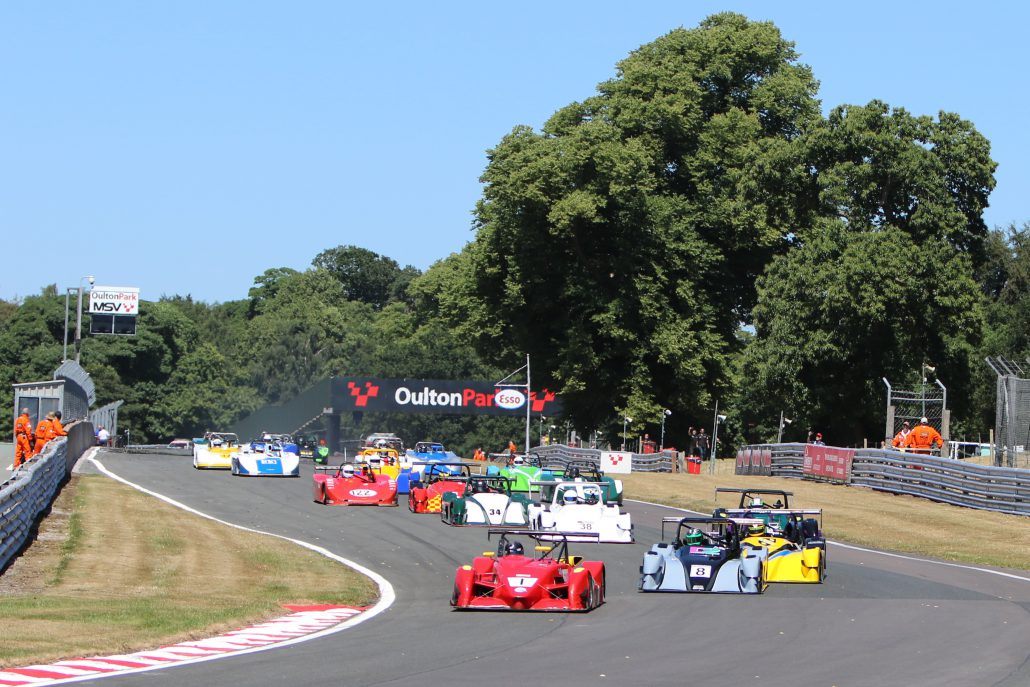 Oulton Park would see races 3 and 4 of the Sports 2000 championship as a double header weekend in the height of the great British summer. Some minor updates and adjustments were made off the back of the team’s success at Silverstone, mainly to compensate for the contrasting track surfaces and layout. The build up to this weekend held particular importance as the student led team would receive their end of year results during this time. It is always a period for nerves and trepidation, however, these feelings quickly evolved to those of satisfaction and relief when the students learnt they each successfully completed the year. Congratulations!

The team arrived at the circuit on Thursday afternoon and took advantage of a rare spot of shade to set up base in anticipation of the predicted climbing temperatures. Car 40 was rolled out of the trailer and inspected after the journey from Swansea. With everything in order, the team retired for the evening to quench thirsts and refuel ahead of a full days testing on Friday.

The sun was already beating down by 8am as Tim prepared for his first session to reacquaint with the circuit. A busy group would prove challenging in the attempt to find some free space, but Tim dealt with traffic efficiently whilst settling into a confidence building rhythm before the session ended.

Session 2 saw Tim continue his rhythm, squeezing out fractions of a second through each section of the track consistently. The lap times steadily reduced, even with increasingly worn tyres and high track temperatures. Tim eventually found a large enough gap in traffic to beat his fastest lap from qualifying the previous year.

Between sessions the tyres were swapped out for a less worn scrubbed set and a balance adjustment was made to bring the car even closer to Tim. The third session would be the last session of the day for Team MCR as no further improvements could be found, although the lap times remained consistent. The decision to not run in session 4 was agreed by all. The students worked through their jobs list and analysed the recorded data from each session whilst the other cars continued to test. Car 40 was then tucked away for the night, and the team went for a well-deserved dinner.

Saturday proved to be yet another hot day, right from the get-go. The car passed scrutineering and Tim was sent to the assembly area early in hope of achieving a clear road ahead. Qualifying commenced at 10am sharp as Tim began his assault against the stopwatch. The new tyres paid dividends, setting his fastest time of 1:43.686 on his third lap. No further improvement could be made after an additional 4 laps, so the team called the car back into the pitlane early to save the tyres. The starting grid for the first race was set a few minutes later. Tim had qualified 4th by 8 hundredths of a second!

Race 1 was scheduled for 1pm but as the organisers were running ahead of schedule, the team set about preparing the car in good time. The midday sun was fierce as the cars were sent back out on track. Tim positioned his car on the grid and performed a lightning start, hassling the cars ahead at the first corner. At the end of lap 1 the yellow car emerged in 3rd position due to a mechanical failure on Michael Gibbins’ car. Tim gradually extended a gap over the jostling pack behind and settled into what was expected to be a relatively lonely race in 3rd. In the second half of the race, one of the cars broke away from the trailing pack to chase down a podium finish. Tim managed the gap for the remainder of the race until he felt some inconsistencies with the handling of the car just two laps from the chequered flag. Tim made his best efforts to nurse the car home and in doing so, lost his podium position to a determined Josh Law. The problem worsened through every corner until another car was baring down on Tim’s 4th position into the braking zone of the last corner on the last lap. Tim reacted with one final push to the finish line, hanging on to 4th narrowly.

The car was assessed by the team in Park Fermé to reveal a major fault with the rear left corner which would require multiple replacement parts and geometry adjustments. With only a couple of hours until the final race, the pressure was on. The students pulled together, getting to work on removing the damaged components and sourcing replacements. After the rebuild and spanner check the students dialled in the camber and toe settings in time for the second race.

Tim joined the grid in 4th position and capitalised on yet another brilliant start, promoting himself to 3rd by the entry to turn 1.  Tim was comfortable in 3rd until Michael Gibbins, who came from the back, took his position on lap 11. Another 4th place finish was on the cards on what was proving to be a brilliant recovery drive. That was until the stewards made the decision to present car 40 with the mechanical black flag for a fault with the cars breather system, signalling the end of a truly challenging weekend.

Team MCR would like to thank all our sponsors for their continuing support and a special thanks to Geoff Tremblet for all the help at Oulton!