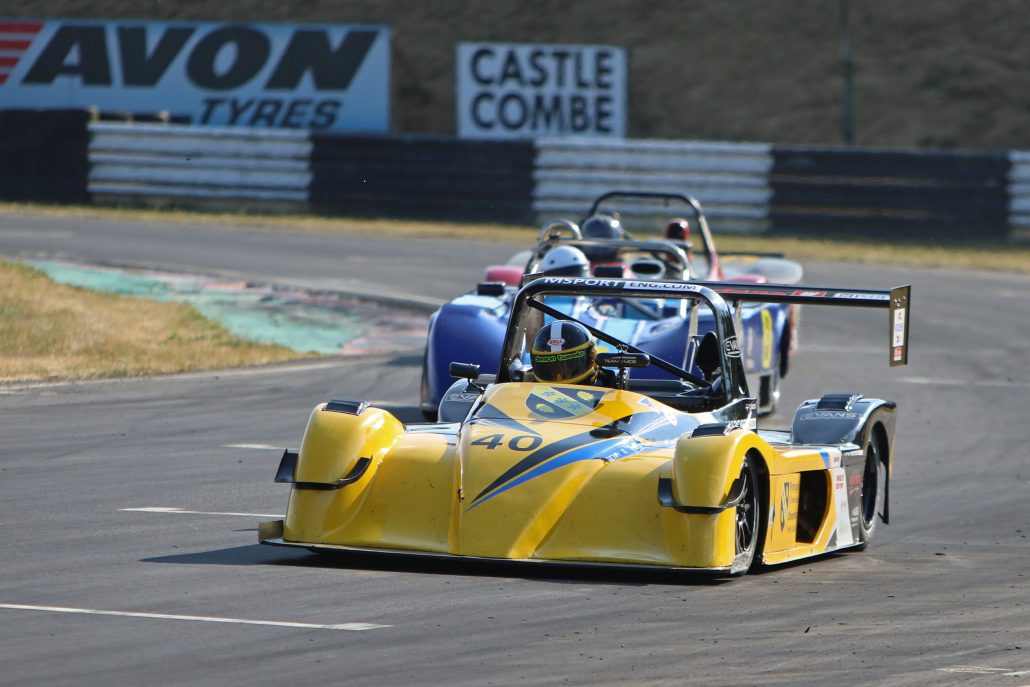 The mid-season misfortunes at Oulton Park concluded Team MCR’s tally of four consecutive podium finishes. Tim and the students took solace from retaining 3rd in the championship overall and set about preparing the car for the next race at Castle Combe, scheduled just 15 days later. The two-week interval was utilised with repairs, inspections and set-up changes all being carried out scrupulously.

The Swansea based race team reveled in the only sub two-hour journey on the calendar. A straight run across the Severn Bridge and into the Wiltshire Countryside meant the team could enjoy their own beds for the entire weekend. What a luxury!

Within an hour of entering the paddock on Thursday 12th July, Tim was secured in his seat for the first of many test sessions available throughout the day. The usual procedure of checking the gear ratios and handling was performed whilst the car found its way through the corners. Tim increased the tempo with a full tank of fuel for the second session to replicate the conditions in which the car had faltered previously, as the students looked on from various points around the circuit. Thankfully, it appeared to be fully rectified.

Some suspension adjustments were made as the car was put through its paces in the soaring temperatures of the midday sessions. Tim began to press a little harder whenever traffic would allow and was rewarded with some encouraging lap times. The team dialled the car in further through the course of the final few sessions until Tim was confident that the car was about as responsive as it could get on the increasingly worn tyres. Spirits were high as Team MCR left the circuit for the short drive home that evening, with an unusually long break until qualifying on Sunday. A thorough spanner check was performed back at the workshop on Friday, followed by a justifiable day off for all on Saturday.

The morning of July 15th saw the team arrive at Castle Combe ahead of qualifying at noon. A packed race schedule, the appearance of the TCR Touring Cars and a hot summers day collectively contributed to a delay in the program, which meant that the Sports 2000 qualifying session was reduced to just 10 minutes. The team focused on the live timings as Tim lapped the circuit with haste, exploiting any piece of road to himself. Team MCR occupied 3rd on the timing screens at the end of lap 4. A little over a minute later, and Tim was pushed down to 4th by a margin of 3 tenths of a second. 20 cars on circuit, all fighting for space to make a final lunge up the grid ladder. Tim had more to give, but time was against him. He opened his penultimate lap with clear road ahead and bolted. Tim’s line was jeopardised by slower cars later in the lap, leading to a desperate push to regain lost time into the final chicane. All 4 wheels locked under braking and the momentum pulled the car around into a spin. Qualifying was over. All 4 tyres suffered flat spots from the spin, but the team could have asked no more from their determined driver.

Team MCR operate with a set quota of tyres per season, allocated from their budget. With 3 races left on the calendar, only 1 new set of tyres were available. The decision was made to swap out the wounded tyres for a fresh set for the race. The team meticulously checked the car after the bittersweet qualifying session, swapping out some fatigued parts to ensure maximum reliability for Tim to capitalise on his position. The race was scheduled for 5.30pm and the car was as ready as it could be.

The Sports 2000 competitors were called to assembly and shortly after, sent out onto track to obtain formation. With all cars placed in grid boxes and all eyes fixed to the start light gantry, car 40 was preparing to charge. The red lights extinguished, and the yellow car punched forward with greater drive than those around it. Tim was alongside 3rd into the first corner, Folly, and had already secured the position through Avon Rise. His sights firmly set on the grey and black car ahead. Tim settled into the race, ever so slightly closing the 3 second difference until the car ahead slowed dramatically. A mechanical issue caused the early retirement of David Houghton, promoting Team MCR to 2nd on the road. Tim’s attention quickly turned to increasing the distance to the car behind and successfully achieved an offset in lap times consistently. It wasn’t long until the lead cars hit back markers on this short, fast track, with Tim negotiating his way through assertively. Tom Stoten began to stretch his legs in 1st as the team managed Tim’s lap times from the pit wall. Tim was kept sharp with fast approaching lapped cars but saw no sign of a challenge from behind. 30 minutes passed by, before the chequered flag was produced. A dominant victory for Tom Stoten, and an equally dominant 2nd place for Tim Tudor. Tim was also given the ‘driver of the day’ award from the club, which rounded off an excellent weekend!

Team MCR sought great pleasure from achieving yet another podium this season. The team are looking forward to the 3 races remaining, all being held at Brands Hatch, and hope to add to their podium tally!