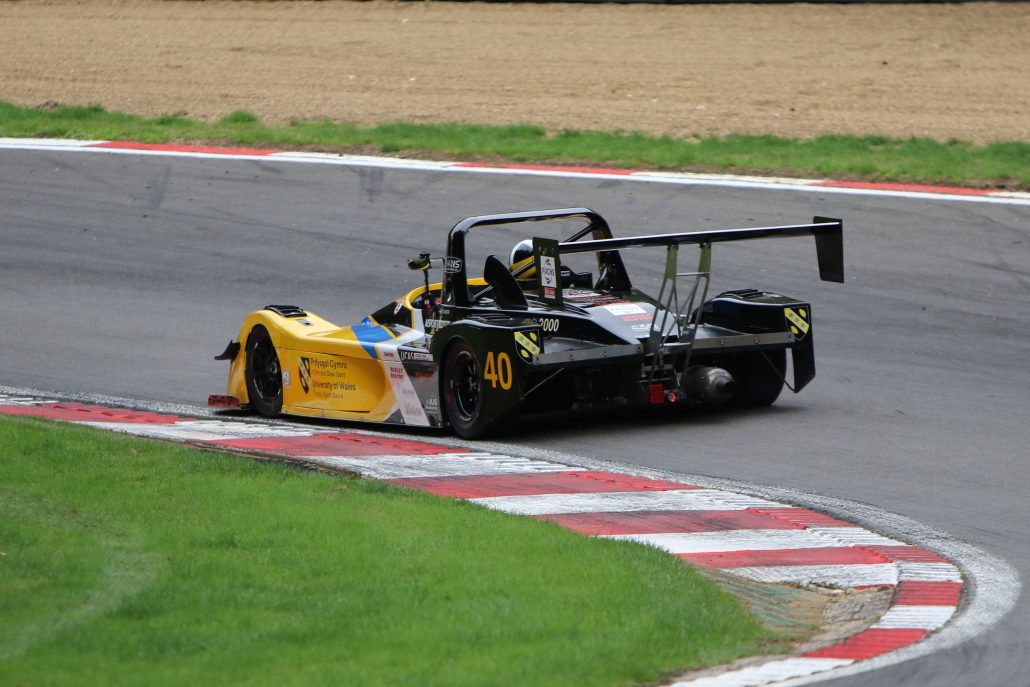 After the impressive points haul at Castle Combe, the students set about preparing the car for the next round in the usual way, except this occasion held great significance…

For over 20 years, budding engineers have learnt their craft within the walls of the Mount Pleasant Campus, Swansea, but It is finally time to say goodbye as the whole Engineering School is moved to the Waterfront Campus at SA1. A cloud of nostalgia sweeps through, but the silver lining is brand-new, purpose-built workshops to look forward to!

Brands Hatch GP, a world-famous circuit steeped in motorsport history and the chosen venue for the penultimate round of the 2018 campaign. With a final farewell to Mount Pleasant on Friday morning, the team ventured along the M4, and into Kent.

For the first time this season the weather looked unpredictable, so on arrival the students hastily erected the gazebo in preparation for all climatic eventualities. Throughout the day various race cars took to the track for general testing on the Indy circuit. The team decided to save tyres & fuel by not testing on the shorter layout, providing the students with an opportunity for a relaxed afternoon of spectating. As the light began to fade, and the sound of roaring engines fell silent, the crew set about checking-in to hotels & pitching tents.

The distinctive nature of this race weekend continued into Saturday, for both qualifying and the race were to be held just 6 hours apart! A good night’s sleep saw Tim and crew fully energised and raring to go. The car was carefully checked first thing, before the formalities such as noise testing and scrutineering were addressed. A short while later, Tim was called to assembly ahead of an overcast qualifying session.

The cars dispersed onto the track to find space before disappearing into the wooded GP section for the first time that weekend. Tim quickly found pace, and on lap 3 he set his fastest time, an impressive 1:31.8. Team MCR sat in the top 3 for several laps, as everybody contended with a busy circuit. Traffic was becoming the limiting factor on this fast and flowing circuit. For the first time this season, Michael Gibbins found an answer to Tom Stotens pole-setting pace, going purple with a blistering 1.29.4 on his final lap. Behind the two front runners, 3 tenths of a second separated 3rd from 6th, which is where Tim finally placed.

The yellow UWTSD car stormed off the line, reeling in the cars ahead. A short run to turn 1 saw the 6 front runners’ concertina together. Tom Stoten, Tim Tudor, Josh Law, 3 abreast into turn 1. Contact was made, with Tim in the middle. A damaged front corner & bodywork pushed car 40 onto the backfoot in the climb up to the hairpin. At the end of lap 1, Team MCR held 5th. Michael Gibbins stretched his legs out in front, with Tom Stoten pressing to catch.

Nick Bacon, piloting the Gunn TS11 kept Tim honest for the next few laps, before a late dive into Druids on lap 8. Tim defended well but the Gunn caught the back corner of the MCR in the braking zone, causing a spin, and leaving Tim facing the wrong way in the middle of the road. A pack of Trailing MCR’s passed as Tim manoeuvred the car to face the right direction, but a drop to 10th was the penalty for this racing incident. Thankfully, only minor damage was dealt to both cars. The front runners continued their charge to the chequered flag as Gibbins carved through the backmarkers, Tim now trailing over a minute behind…

The UWTSD race car was nursed across the finish line after picking up one final position in the closing stages of the race. 9th overall, 6th in class. For what could have been a DNF, the students were very satisfied with Tim’s determination and perseverance to bring it home on the road. Although the maximum potential of the car was not achieved this weekend, the team feel proud to have finished with points, and look forward to repairing the car for their return to Brands Hatch in October… the final round of the season.