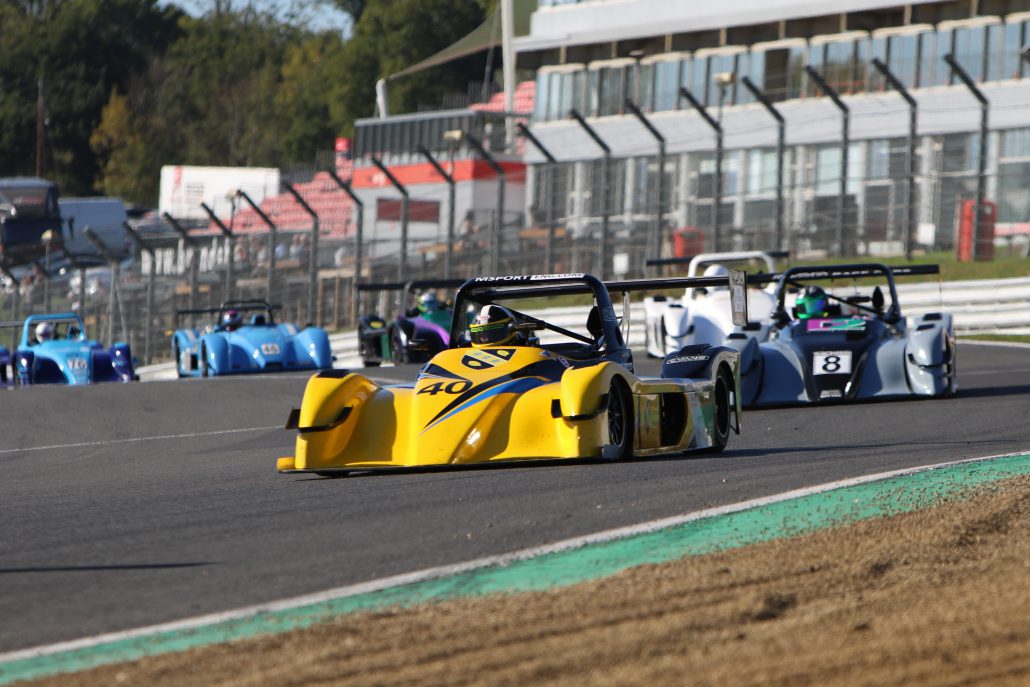 A new academic year marked the beginning of a new chapter for the School of Engineering at UWTSD. The fresh, modern Waterfront build would now be considered home for the university race teams. Team MCR wasted no time in becoming acquainted with their new surroundings, working hard to repair the wounds from Brands GP. A broken suspension arm and moderate front bodywork damage being the full extent. The team then went about setting the car up for the final time this season.

The Formula Ford Festival has become somewhat of a tradition for the Sports 2000 Sprint Championship, and the double header grand finale never fails to disappoint! An excited convoy of students made the familiar journey to Brands Hatch before unloading the race car into its allocated pit garage.

Early Friday morning, a full day of testing ahead and although the forecast was predicting sunny spells all weekend, a sharp autumnal feel was present. The first test session was steady. Cold, used tyres took a while to find grip but it wasn’t too long before the pace picked up. Session 2 saw Tim begin to put the hammer down, cutting through the slower tin-tops with ease until a brief pitstop for balance adjustments. The lap times continued to plummet as the car settled and Tim increased his confidence with each lap. A quick look at the data before the next session illustrated areas for potential line, gear and braking changes, so Tim addressed these suggestions in the third session, seeking the ultimate compromise for overall lap time. Happy with the balance and pace, the team decided to try something entirely new for the final test session.

As part of the long-term development of the car, an aerodynamic study has been pursued by students and finally, an update was ready! This took the form of a re-designed front splitter, made from composite materials & shaped for greater performance. With the new bodywork attached, Tim emerged on track for his out lap. Car 40 reappeared in the pitlane after just 1 lap. On close inspection it became apparent that the splitter was working well, but the car setup required changing to accommodate it fully (not a job for the final round of the season!) A successful days testing meant the whole crew could relax for the evening after checking the car over once more.

Some new faces joined the usual crowd for qualifying on Saturday. Ben Cater driving an MCR, Charles Hall in a Gunn, Lewis Kent in the “one-off” Ray and Paul Trayhurn making a return in his Gunn. As the 15-minute clock began to tick down, the cars were released on track. Tim settled into a groove and consistently dropped his times by around a tenth of a second a lap, utilising all the available performance from the fresh tyres until he peaked at a brilliant 47.683, P5 on the grid. It was an extremely tight session, with the top 10 all closely contested. Less than a second separated 2nd from 10th. Tom Stoten took pole to make it 5 out of 6 this season, a 47.251. With the grid positions set, the 2018 team retired to a local restaurant for their final evening meal together, reminiscing about seasons gone by…

Race 1, An incident off the line left Charles Hall stranded in his grid box as everybody tried to manoeuvre around him. Tony Jarvis & Paul Trayhurn got caught up whilst taking avoiding action, colliding into each other and Hall. The race was adjourned until the track was cleared, resulting in a second standing start. A chaotic few minutes ensued as pit crews scrambled to the grid with battery jumper packs. Eventually, a successful restart saw Tim emerge in 3rd. As the race went on, Tim’s gap behind to Houghton stagnated at around 1 second with the introduction of back markers. 4 laps from the end, Houghton began to gain some ground until the point where he forced defensive lines from Tim. On the final corner, of the final lap, Houghton appeared within a car’s length of the UWTSD MCR and as they approached the finish line, Houghton pulled further alongside until they crossed together. The team waited in suspense for the final standings and had to settle for 4th position, still a very strong finish! 0.027s separated the two on the line, in Houghton’s favour.

The engine data confirmed Tim’s feedback that a drop in fuel pressure consistently through the last 5 minutes of the race had jeopardised the pace. The students only had a few hours to find and rectify the fault, so they set about gaining access to the fuel pumps and filters. A short while later the fuel system had been fully cleaned after a partially clogged filter had been found.

Race 2, the final race of the season and it did not disappoint. The drama began with an electrical fault on the pole sitter’s car, resulting in a non-start. An unfortunate end to such a dominant season. The three cars involved in the previous incident were also unable to start the race. A fractured grid formed along the banked Brabham Straight. Tim performed his signature start, swiftly promoting himself from 4th to 2nd. Michael Gibbins followed suit, attached to the rear end of the university car until he affected a pass on lap 2. Behind, Houghton and Lesniewski battled hard for 4th. Tim followed Gibbins closely, fluctuating around a 1 second gap through lapped cars. Gibbins managed to hold position until lap 22, where he retired the car into the pitlane.

Car 40 was now in 2nd with Ben Cater 2.5s up the road. Tim could see the black MCR ahead and gave chase. An intense few laps followed as the race built to it’s crescendo. The university car crept closer and closer until a moment in traffic where Tim got within a tenth of a second of the debut leader. Cater did enough to remain on the top step, Tim crossing the line just 0.717s behind. The gap to 3rd, an impressive 20 seconds! An incredible result for the student led team, the perfect end to a strong championship campaign. Tim also received driver of the day, a superb reflection on his driving performance.

The student led race team have worked incredibly hard to produce a competitive race car for each championship round this year. Hundreds of hours have gone into preparation, development, management & logistics, from high intensity moments in the pits to the complex task of agreeing a suitable eatery at a race weekend! This has been rewarded with another 4th place in the championship after drop scores (3rd on overall points) with a number of podiums during the year ! The entire process would not be possible without the continuing support from our sponsors, so we would like to take this opportunity to say thank you.

The team will be working tirelessly over the winter to develop the car further, for what hopes to be another successful year in Sports 2000.