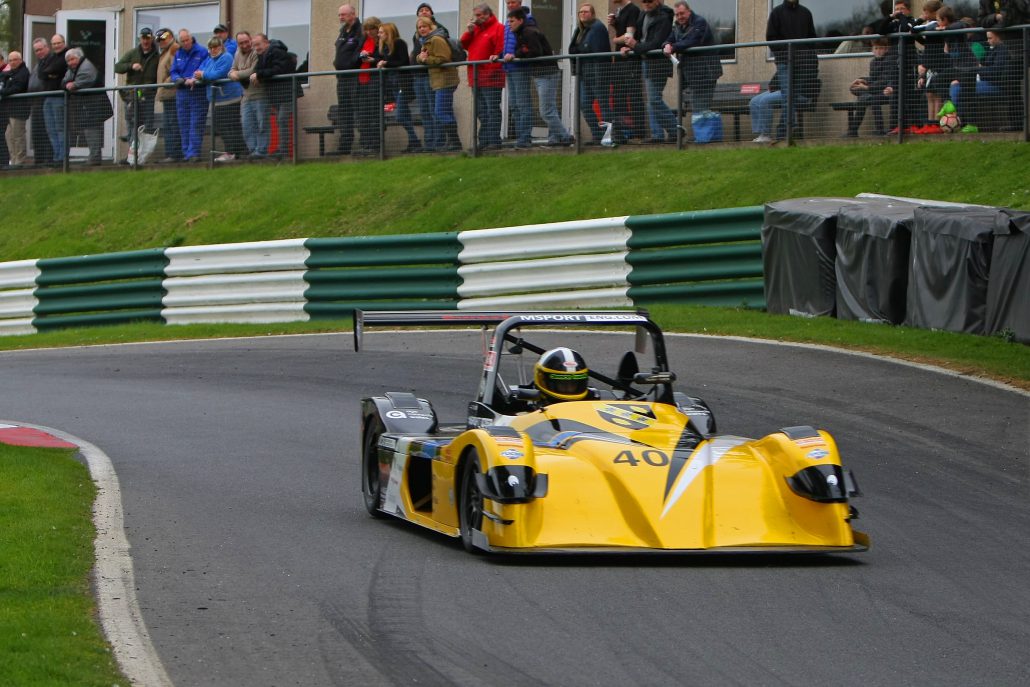 The Second Sports 2000 Championship weekend was held at the  Caldwell Park race circuit based in Lincolnshire. For the Swansea team, it was a huge 300-mile trek to get there. The team arrived on the Friday, to have plenty of time to prepare for the qualifying on the Saturday.

Cadwell’s track is vastly contrasting circuit to the first round in Silverstone. The course is much more technical and challenging; with many hills, cambers, sharp corners and a narrow track leaving very few places to overtake. However, it’s twists and turns set in a picturesque woodland made the track a beautiful sight. The UWTSD students managed to take in the scenery as the sunset on their track walk after having unloaded the trailer.

The team had a relaxed start with qualifying at a late 5.20 pm. As the team was unable to make the testing, it was a long wait to find out whether their efforts over Easter had been fruitful. However, with the extra time to kill, they had the exciting opportunity to watch the formula Jedi’s and the mx-5s race around the circuit.

Finally, the team eagerly got the car out for qualifying. There was a lot of uncertainty as the team was not able to take part in testing, so Tim had only gone around the track on the simulator. Unfortunately, it was immediately evident that Tim was struggling with the car and getting to grips with the circuit. The team qualified at a disheartening 13th position and Tim  fedback that the front end was understeering and very stiff.

After checking the car at the end of the qualifying, the team concluded that the results were caused by a combination of factors affecting the performance. There was Tim’s lack of experience of the track and a major issue of in-sufficient travel on the front suspension resulting in a very hard front end, instability and understeer. On the positive side of things, there were no issues we couldn’t fix at the circuit and  it just meant the team had some work on their hands!

It was a long night to overcome the issues. UWTSD students worked in the bitter cold darkness of the scrutineering bay. The students adjusted the suspension set-up to resolve the cars handling issues. After successfully setting-up the car for those of the team that was not camping, faced a gruelling 45minute travel back to the hotel for the night.

The Sunday morning, was a cold, early start! The team set about solving some minor teething problems including a water leak  but had the car fixed and ready to go in ample time to crack puns and drink coffee.

After the testing qualifying session, it was race time! The race started well! Tim pulling ahead with a fantastic start – again – taking 3 cars by corner 3! Thankfully the car was running smoothly with no mechanical problems. The team had an exciting race. Tim blasted it! Pulling us back 5 positions and having a great battle with Peter Williams. Once Tim cleared Peter by pulling off a late move into Mansfield, he pulled away and caught Peter Brouwer and Giles Billingsley. Unfortunately Tim ran out of laps and finished 0.116s behind Brouwer and 0.462s behind Billingsley.  Tim’s lap times had vastly improved and were competitive, proving the team had done a fantastic job on fixing the suspension issue and Tim had settled into the demanding circuit. UWTSD’s ‘Lightening Bertie’ had managed to finish in 8th position which was excellent damage limitation after the poor qualifying!

It was a testing weekend with the team experiencing motorsport at its best! UWTSD students having pulled through all the obstacles as a unit, all the while with laughter and very poor puns, resulted in a brilliant weekend. Bring on Oulton Park in the next 3 weeks!