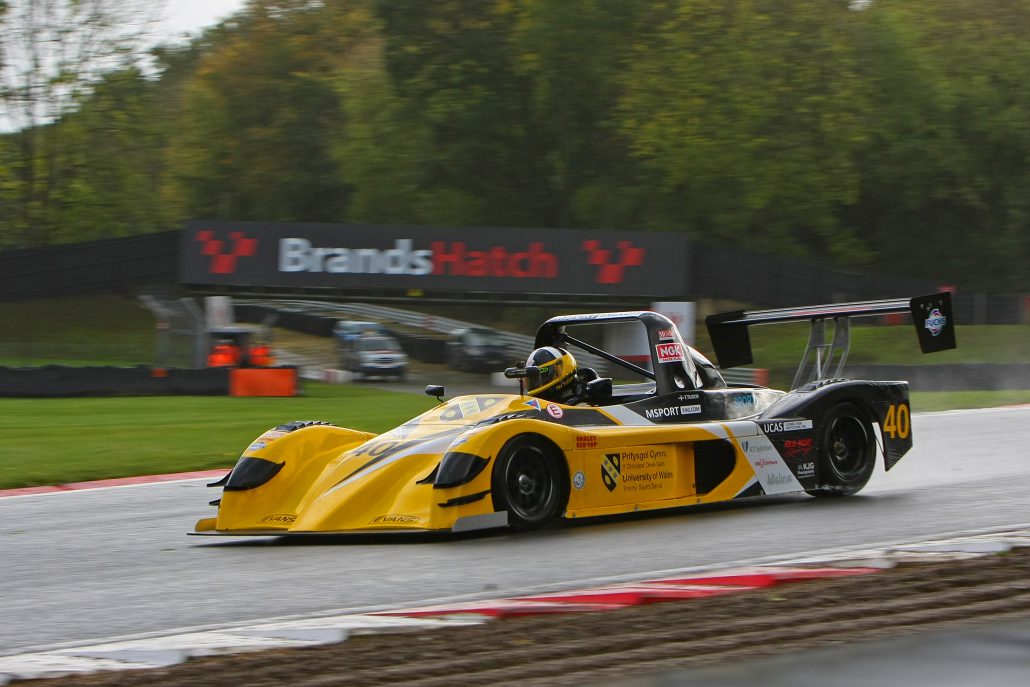 As the end of October approached the team headed for Brands Hatch for the last round of the season. Tom Stoten had clinched the Duratec championship at the last round at Snetterton. Michael Gibbons & David Houghton were in a close battle for 2nd and it was sure to be a good fight all weekend. For the UWTSD Student team, the aim was to secure 4th place in the championship.

The team arrived at the circuit on Thursday night and setup in the garage ready for a busy day’s testing on Friday. The day started with a damp track but was a positive session which allowed Tim some wet weather practice with the weather forecast on Saturday looking variable. The team tried a range of options throughout the day, changing dampers and suspension options as well as  gear ratio options in the middle of the day. By the final session of the day, the team had found a set up that Tim was very comfortable with.

On Saturday, as Storm Brian hit Swansea and the Welsh coast, the team were preparing for a Duratec only qualifying session just before lunch. The track had been drying out all morning but as Tim was about to go to the assembly area the winds increased and the rain poured down. Luckily for the team a local marshal warned them that it was going to be heavy and the team responded quickly to change to wets. This meant Tim was able to lead the whole field out when qualifying started and benefitted from good visibility as he wasn’t affected by the spray. During one of the toughest qualifying sessions Tim had ever taken part in, the car performed well. Apart from one small spin at Surtees, Tim had a great session and was able to secure an excellent 4th on the grid.

Due to reduced numbers of the final rounds, the drivers decided that instead of separate Pinto and Duratec races on Sunday, the grids would be combined and everyone would get two races. (Half points awarded for each race)

Sunday morning was bright & sunny and all signs of the bad weather from Saturday had disappeared.

The cars all lined up on the grid ready for the start. Tim made a good start and kept up with the three in front. As they went around Druids, Tom Stoten locked up and went wide, Tim was on the inside line and unsighted to Tom when he turned in, leaving Tim with no where else to go; there was a small tap between the two, sending Stoten into a spin & last place.

Tim pulled away from 4th place and found some clear track to have a calm race in 3rd.Unfortunately, two Pintos going off at Paddock Hill meant the race saw two separate safety car periods. On the second restart, Tim defended well and kept third. He then proceeded to build up a very good gap to 4th. As the chequered flag fell, Tim secured 3rd overall and 2nd in class. The team were then able to witness Tim take his first racing podium.

The grid for the second race was based on the finishing places from the first race. Tim made a good start but David Houghton managed to get past him by the end of lap 1. Tim had a good race keeping a sensible gap to Houghton in front and the cars behind. The race leader Paul Trayhurn had to retire from the race, promoting Tim to 3rd. Tim kept this position and made it a second podium finish of the weekend.

As the season has now drawn to a close, UWTSD Team MCR would like to thank all their sponsors for their continued support during the 2017 season.  The students have worked hard this year to help ensure they have achieved the results that the car, Tim & Team are capable of. With one 2nd and three 3rd in class, along with a driver of the day award, the team feel very proud of themselves and have learnt a lot along the way.

As always we could not do this without the support of the university, and all of our supporters without whom, this season would not have been possible.

The Team are already looking forward to the 2018 season and hope to continue the recent run of success!