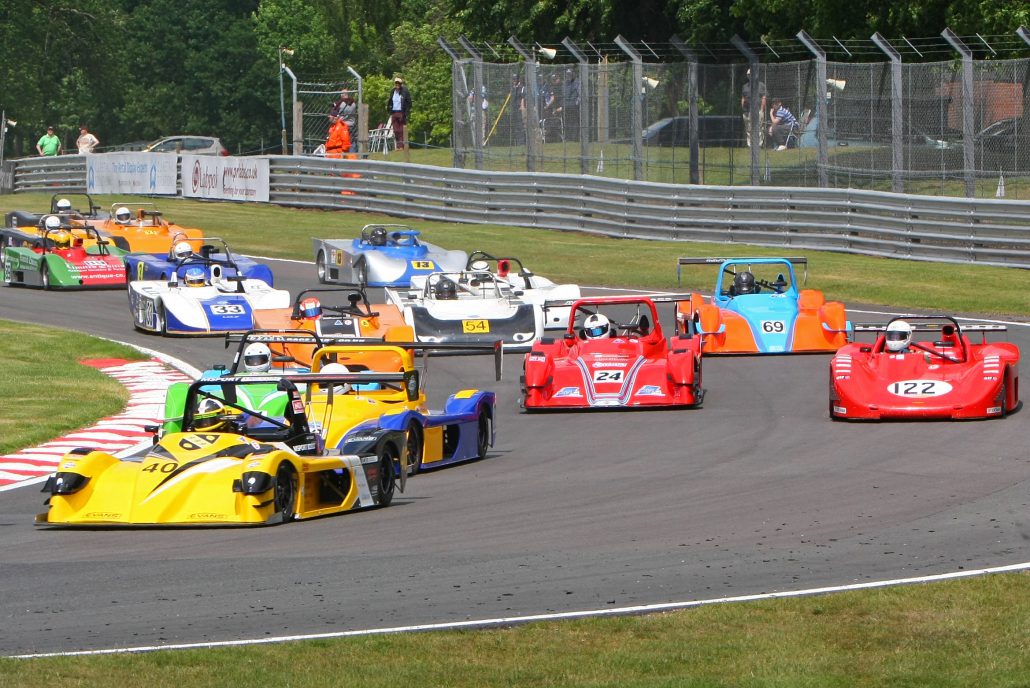 While most of the country enjoyed the early summer heat wave on Friday the 26th May 2017, the team were travelling up north to Oulton Park for the third race weekend of the Sports 2000 Championship. On arriving at the circuit, the team had ample time to relax and prepare for the qualifying and races on Saturday.

The weather forecast for Saturday was suggesting that the thunderstorms that had hit Swansea overnight would be heading towards the team as the day progressed. Which on top of a packed timetable of a qualifying and two races, suggested the team were in for an interesting day. The day started with a damp but drying track, however with patchy clouds remaining and the threat of thunderstorms looming, the team made sure the wet tyres were at the ready.

The qualifying session was early, so it didn’t leave much time for preparations but the final checks were done and Tim was sent out. Unfortunately after just a couple of laps, Tim coasted back into the pits with a broken throttle cable and so the qualifying session was over for the team. However from the three laps that Tim had managed to post, he recorded a lap that was good enough to qualify 7th for race 1.

The team quickly started working on the car to get it prepared for race one as there was not much time between the sessions. The team replaced the throttle cable and tightened the rear anti-roll bar drop link that had come loose during the qualifying session, as well as doing the normal pre-race checks.

As race one was about to start, the track was still dry and the while the clouds still loomed there was no sign of the thunderstorm, so the car was sent out on slicks. Tim made one of his great starts and was able to gain a place and the top six pulled away from the rest of the pack. Michael Gibbons and Tom Stoten were in a race on their own, in what proved to be a race to the line, with Tom just pipping Michael on the final lap. For the Tim, the race went smoothly and he was able to gain another place by the end of the lap, earning him a 5th place finish.

Tim’s finishing place in race one determined his starting position for race two, but before race two could start the team needed to a whole car check. This time the team didn’t find any major problems and so were able to spend the gap between the two races, conducting a full spanner check and solving a minor oil leak.

Before long, it was time for race two to start and the weather appeared to be holding off. Unfortunately one competitor Paul Trayhurn who should have started one row in front of us in third position, had to pull out of the race with an oil leak, this meant Tim was promoted to a starting position of 4th. Tim pulled off another great start and managed to get into 3rd. However there was then a first corner crash between three of the pintos further down the field that required the safety car to be deployed. This bunched all the cars up and after the safety car pulled into the pits again, Tim was unable to hold onto 3rd position and ended up slipping down to 5th due to lack of grip from the tyres. As the chequered flag was waved on the last lap, Tim had managed to retain a credible 5th position for the team.

The two 5th positions achieved at Oulton Park have now put the team in an incredible fourth place overall in the current championship standings. The hard work from the team this session is already showing its rewards. It was a great day of racing for Team MCR and the thunderstorms that had been predicted never materialised.

With nearly 7 weeks to prepare until our next outing at Castle Combe, the team will be eager to see what we can achieve next on Saturday 15th July.